The Memorial Mass for Ralph Smith will be on Sat. Nov. 23rd at 11 am at St.Isidore’s Church in Danville with reception to follow in the church hall. St. Isidore’s is at 440 La Gonda. From 680 take exit 40 West on El Cerre to south on La Gonda.

Love this picture of Ralph which his daughter, Janet Keeter Smith, posted on Facebook yesterday afternoon. It was taken at the Smith house in Alamo. I like the way one of Ralph’s Tiffany lamps is reflected in the window.

Janet wrote:
“This morning after 89 years on this Earth we lost our Dad and my Mom’s best friend. He was an amazing artist, athlete and family man. Our family is grateful for all the support over the last couple of years. Ralph Smith is now at peace.”

Ralph and Joan’s oldest son Dave Smith of Portland posted this picture of himself and his Dad:

“Early this morning my Dad passed away after a long health battle at the age of 89. He and Mom were married for 61 years. As a demonstration of his toughness, he’d outlived the doctors predictions by a year. I like to think that he and death got tired of fighting and called a truce – he gets to rest now. Watch out though, He’ll be tougher in heaven!

Dave also posted this picture of Ralph and Joan on their wedding day, Sept.6, 1958. 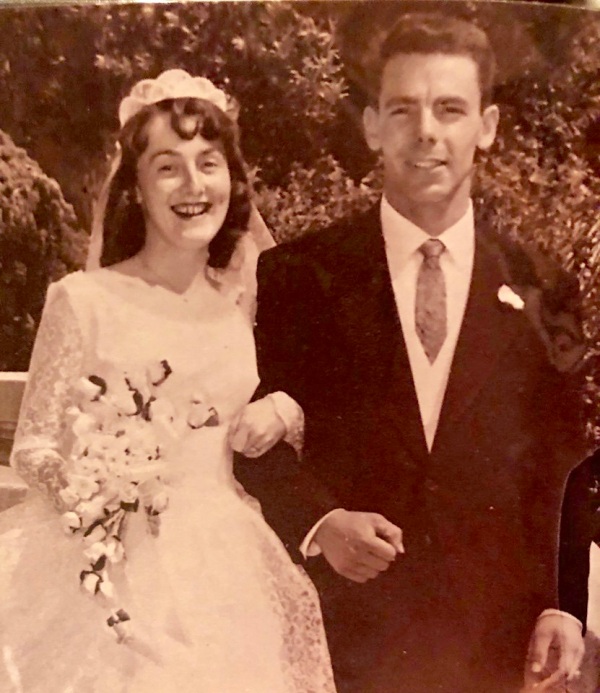