The reception following the Memorial Mass for Ralph Smith last Saturday was in the church hall which was set up with 15 tables for 8. The centerpieces were made by Anne Smith, Ken’s wife. I brought one of the centerpieces home: 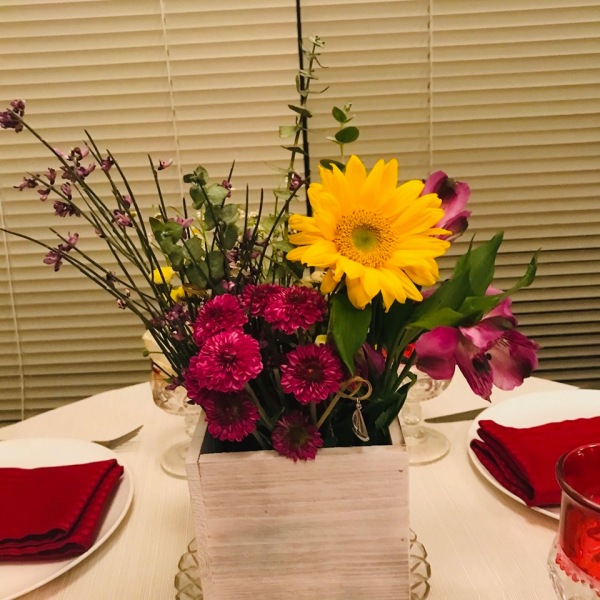 Note the charm sailboat hanging on the lower right of the arrangement. Ralph used to have a sailboat which he kept at the Berkeley pier. I discovered 4 more such charms as filler in the bouquet:

Charms in the bouquet were a sail boat, tennis racket and ball, painter’s palette, a frog, and another sail boat. Maybe Ralph saw frogs when he was working at the UC Botanical Gardens?

Brother Jim on the left in the photo below (dressed in Ralph-type sweater and shirt) sent me this photo which Beate took:

Brother JIm Canty from Berkeley, Greg and Mary Zavadil Gutierrez, Patricia Zavadil, John Zavadil, Betsy Zavadil Davis, Kathy Canty Brown, Tom Zavadil and Pat Canty (widow of my brother Tim). Greg, Mary, and Tom flew out from Denver just for the day. John flew in Friday night from Albuquerque as did his younger sister Betsy from Denver and they hung out in the Bay Area until Sunday.
Standing talking in the back corner are Jim’s son Mike Canty, who flew up from San Diego, and Dave Smith. Seated in front of them is Jim’s daughter Nora Canty-Hilchey and her mother Dena Canty in the aqua top with her back to the camera. JIm’s daughter Monica Canty McCarty sent her regrets. She had a conflict. It was her husband Dave McCarty’s 50th birthday and sometime ago she had planned a tailgate party for him at the Stanford-Cal game.

Here is the same group, but with Beate in the front, and Jim taking the picture.
In the back you see Clark’s outstretched arm in the open doorway. That is me in front of his arm, and son Brandon is standing talking to me and to my sister Joan.

These are 3 of Joan’s high school classmates: Karen Jorgensen, Mary Grace Pruitt, and Barbara Reid. At the table to the right is Joan leaning over talking to Dena Canty. I recognize Dave Smith’s Blue and Gold Cal tie. He and Muffy are standing behind Clark. At the left table is Brandon facing the camera and talking to Alan Smith. Alyssa Smith is standing there next to her dad. 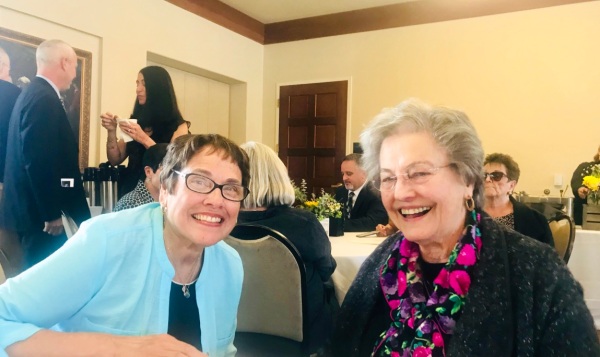 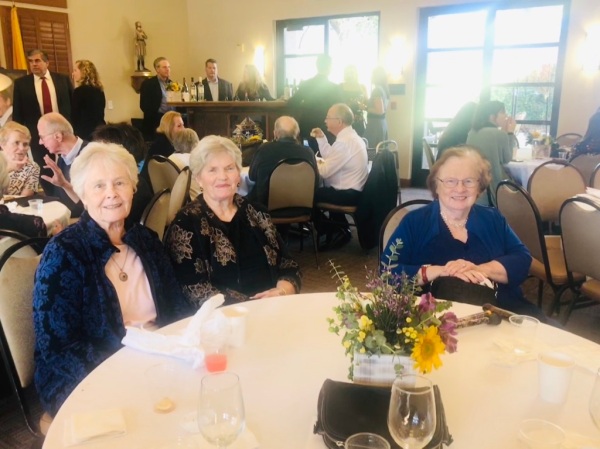 Maureen Sullivan, Sheila Scanlon, and Angela Campbell (maiden names) are 3 more of Joan’s high school and college friends.
Brother Jim is talking to Beate Dietz-Reid at the table behind Maureen.
Standing behind Jim with the red tie is my nephew Tim Canty III and wife Michele who, along with their twin daughters Sydney and Milan, were up from San Diego. Tim is the son of my late brother Tim and wife Pat Canty.
Daughter Colleen commented that of the 18 living first cousins, 15 of them turned out for the memorial celebration.

Beate urged me to join their table: 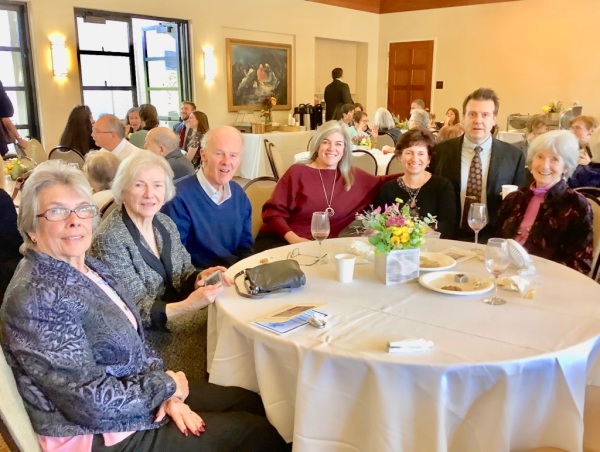 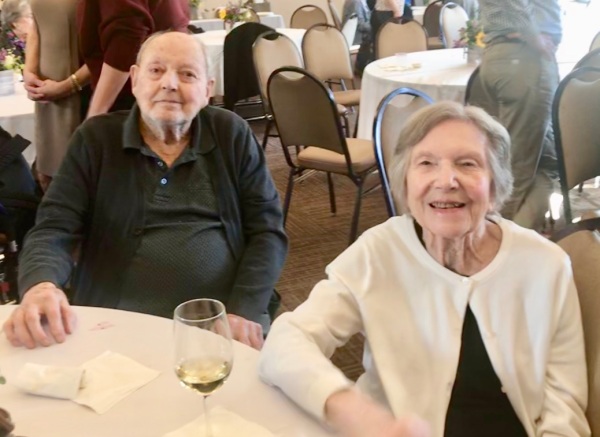 Ralph’s older brother Leo, age 92, and Leo’s wife Nina. When I mentioned to Nina that I had heard that they had recently moved to Sacramento, she said,”But, I like 53 Dawn Drive better.” That is where they lived in Pleasant Hill for 67 years and raised their 6 children there.

Ralph’s younger sister, Pat Miller “Peaches” joined Leo and Nina. Peaches says that she has no idea how she got her nickname. 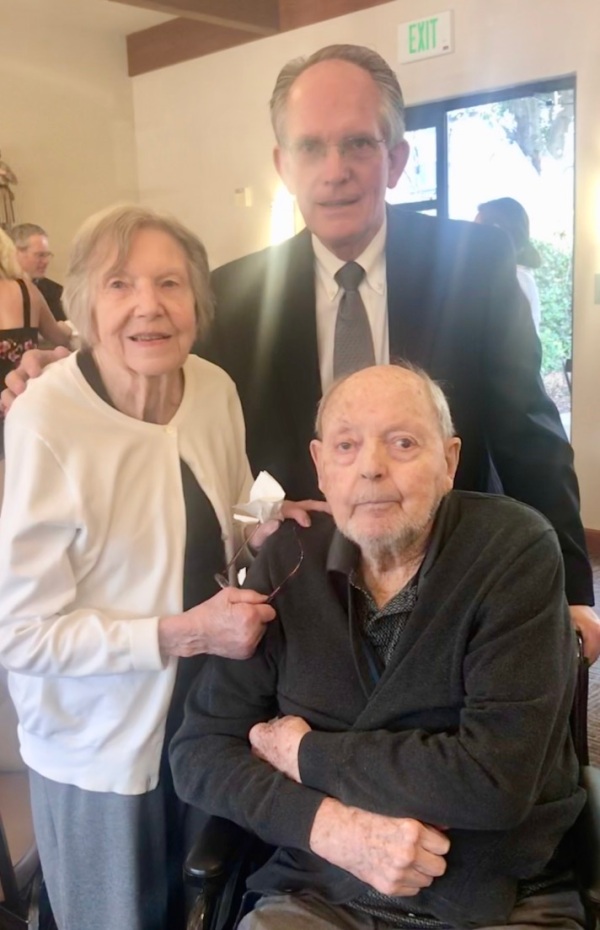 Nina and Leo and their son Rick who lives in Sacramento prepare to leave the reception.

Just as we were going to leave, I thought of getting a sibling picture. Unfortunately, JIm and Beate had already left, so brother Jim is not in the picture:

Barb, Joan, Bob, and Patricia pose for a sibling picture as the reception ends.

Joan says that the party went on until 10:30 pm at her house. We headed directly back to Sacramento so that Brandon and Lisa could go out for dinner to celebrate their 17th wedding anniversary. It was also Colleen and Deke’s 2nd anniversary. But 2 years ago, Thanksgiving was on the 23rd, so they consider Thanksgiving their anniversary regardless of the date.

For the memorial Colleen thought to wear a stained glass pendant which Ralph had made and given her as a young girl, Ralph used to make beautiful Tiffany lamps using stained glass. With the scraps he made pendants such as mine which I have been wearing this week: 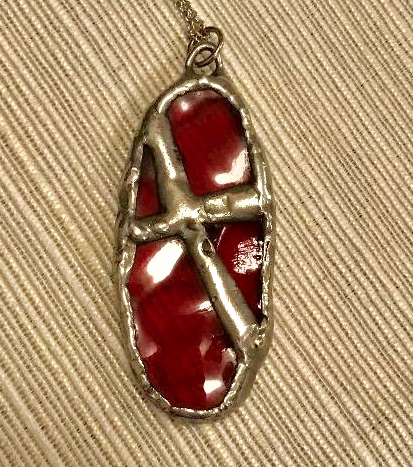 Stained glass pendant made by Ralph some 40 years ago.

Last Saturday was the memorial for my sister Joan’s husband, Ralph Smith.

Cover of program was designed by Joan. 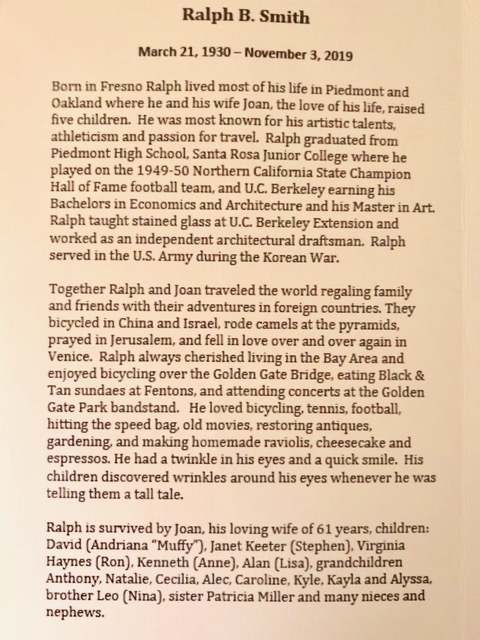 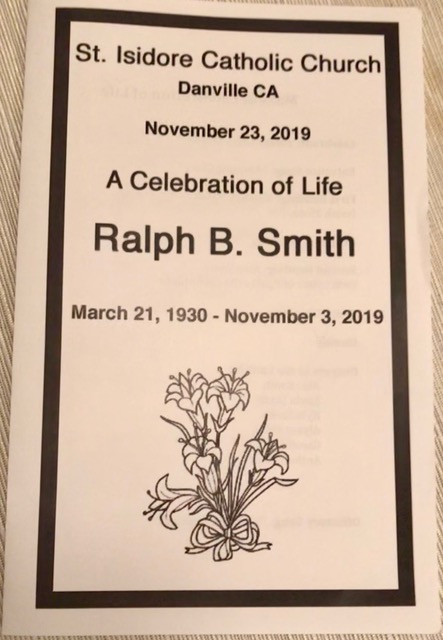 Joan also designed the insert to the program.

Father Gerry Moran was the celebrant. The church has a beautiful outline of Mount Diablo as a backdrop to the altar. That is a statue of St. Isidore, patron saint of farm workers. Fr. Moran spoke with a charming Irish brogue.

Joan and Ralph’s middle son Ken did the first reading. Ken lives in Scott’s Valley with wife Anne and children Alec, Caroline, and Kyle. Kyle and his Aunt Janet played the guitar accompanying the singer during a couple of the songs.

Youngest son Alan (above) did the 2nd Reading. Alan lives in Orinda with wife Lisa Fass and daughters Kayla and Alyssa. Ralph’s sons and grandsons were all wearing ties which had belonged to Ralph. 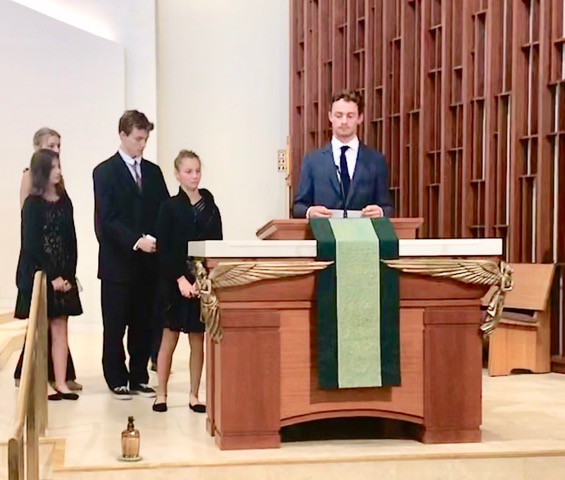 6 of the Smith grandchildren read the petitions. Above Alec, son of Ken and Anne, read the 1st petition. Alec is a student at UC Davis where he plays baseball. 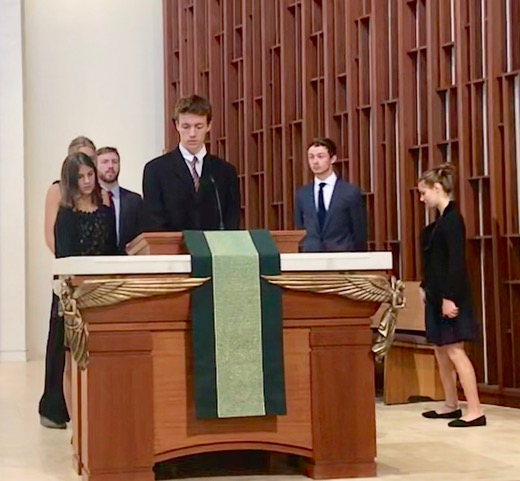 Kyle, youngest of Ken and Anne’s 3 children, did the next reading.

Alyssa is reading a petition. Alyssa is the younger of Alan and Lisa’s 2 daughters, Kayla and Alyssa.
Caroline, Anthony, Alyssa, Alec, Kayla, and Kyle Smith.

Caroline is reading a petition. Caroline attends Santa Barbara City College. She is a runner. She is the middle of Ken and Anne’s 3 children.

Kayla, Natalie, and Alyssa presented the bread and wine to Fr. Moran.

Natalie, Kayla, and Alyssa.
Natalie is one of Dave’s twin daughters. Natalie lives in Seattle. Her twin sister Cecilia is working in Peru for a NGO (Non-Govermental Organization) and teaches English there. In a few weeks Cecilia will move on to Equador. 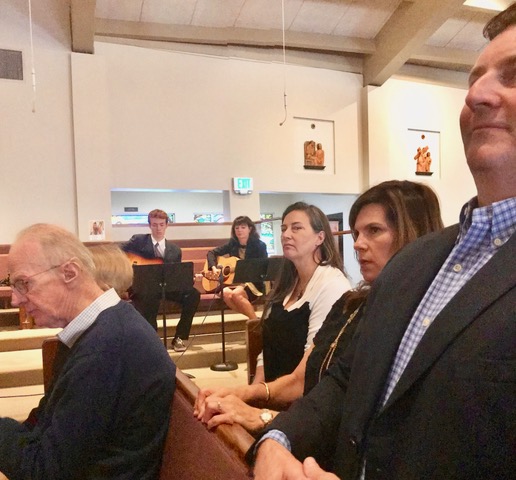 Brother Jim, Beate (hidden), Guitarists Kyle and Janet, Colleen, Lisa, and Brandon. Jim said that he wore a v-neck sweater and open collar shirt because Ralph liked to wear them. 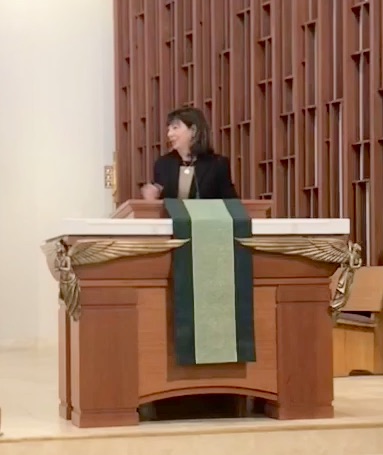 Janet Smith Keeter spoke about her father. Janet was city manager of Orinda and when she retired a couple years ago, Joan and Ralph moved into Janet’s condo in Alamo, so that Joan and Ralph no longer had to walk up the 42 steps to the front door of the house that they had lived in in Oakland for over 50 years.

Daughter Ginny Haynes Smith spoke. Ginny has inherited her Dad’s artistic talent and has entered several of her paintings into art shows. 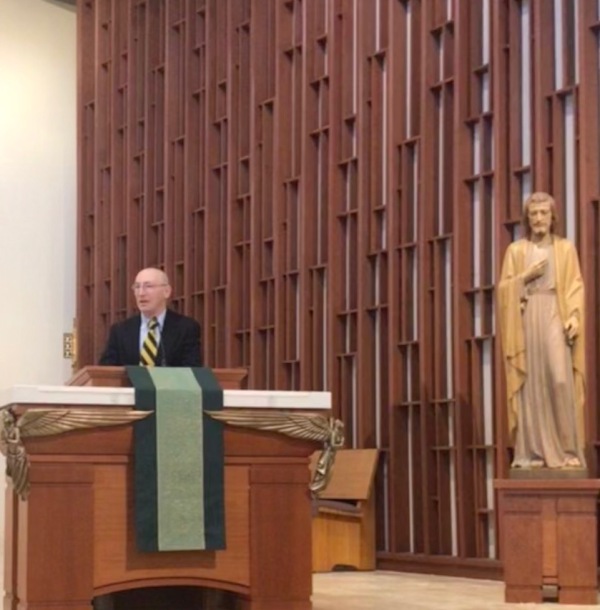 Oldest son Dave was the final speaker. Dave, a Cal graduate, like his Dad, pointed out that he was wearing a blue and gold tie which had belonged to his father. HIs brothers and Ralph’s grandsons also wore ties that had been Ralph’s.

‘
Ralph was a veteran so there was a flag on the table.

At the end of the mass, the military honor guard presented Joan with the flag.

As I left the church, the first people I saw were my sister Patrica’s 2 youngest children, Tom Zavadil and Betsy Zavadil Davis who were talking to my brother, Bob Canty.
The reception was in the church hall right across the street.

I think I will make the reception a separate entry and close this entry for now. 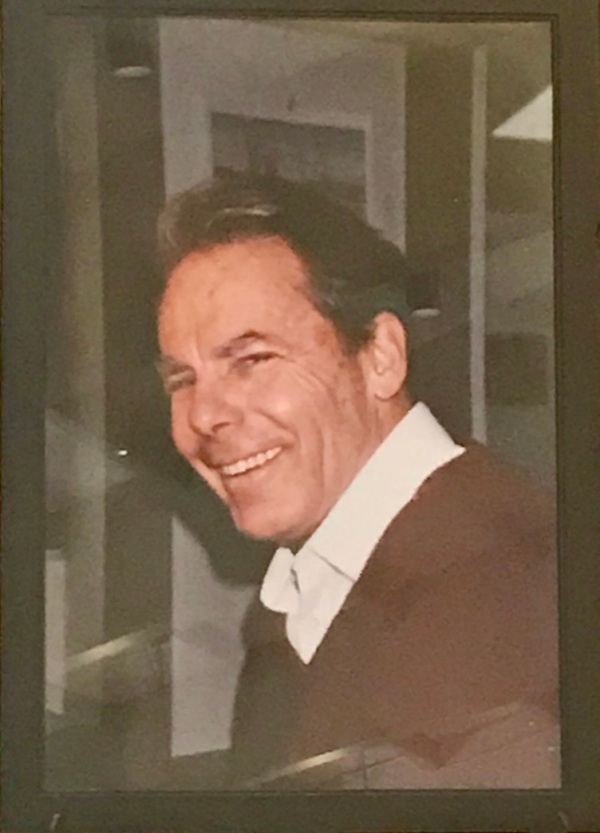 Here are some more photos from the trip that Steve, Kirsten, Paco, and Tommy are taking to Toronto. 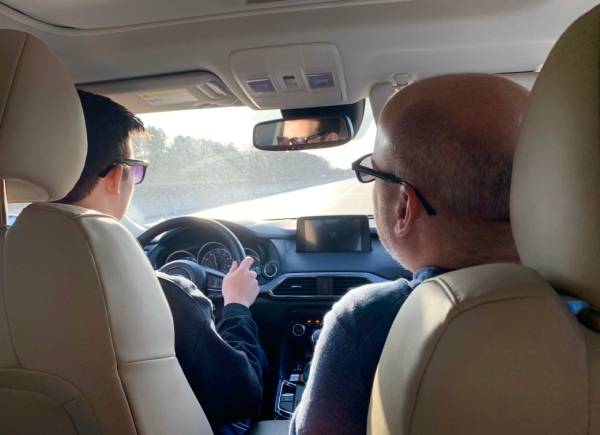 Paco and Steve
Kirsten wrote: “Paco is getting some good highway driving practice in on our road trip to Toronto. Paco drove from Traverse City to Frankenmuth, MI, last night in the dark and now from Birch Run, MI, (where we overnighted) to Port Huron, MI, this morning in bright sunshine. Adults will have to take over the wheel in Canada because they don’t allow anyone under 16 to operate a vehicle.

Tommy, Paco, and Steve at Ripley’s aquarium in Toronto. 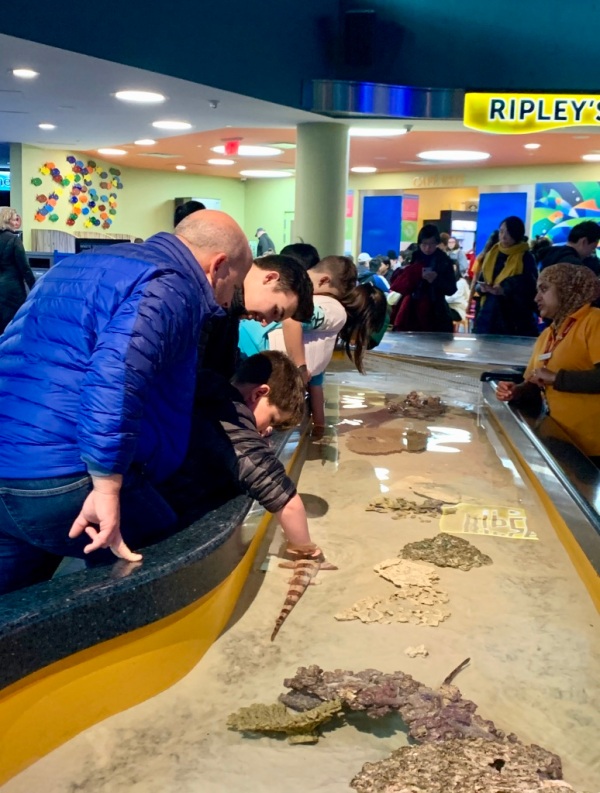 Steve, Paco, and Tommy are working a lock system replica showing how boats transfer from the Great Lakes to the Atlantic Ocean via the St. Lawrence River.
For lunch Tommy requested ramen. They went to the Distillery District which was hosting a Christmas market with vendors. 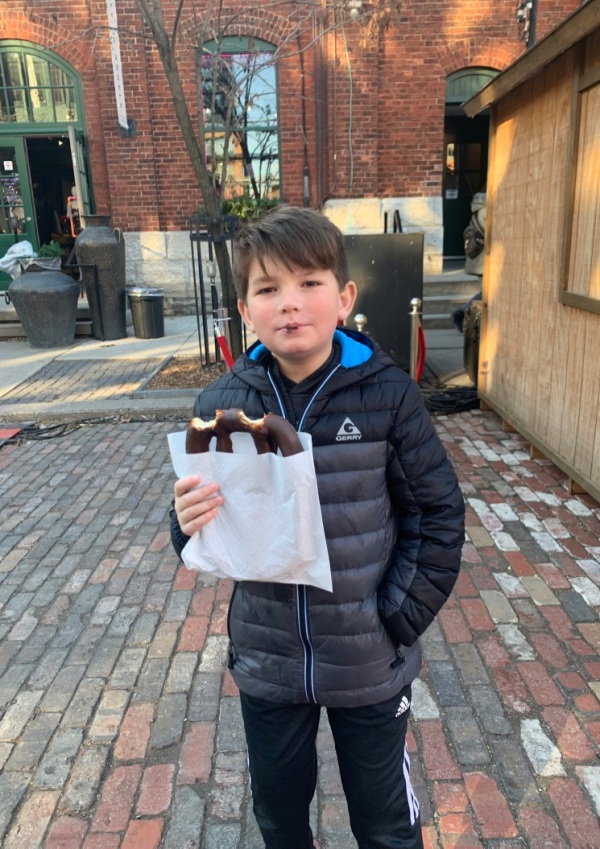 Tommy is enjoying a chocolate covered pretzel. He did not like the ramen.

Paco and Tommy set up blocks of LOVE.

Thanks, Kirsten, and continue your great Thanksgiving trip.

I just received this photo and message from Kirsten:

Paco and Tommy in Toronto.

Kirsten wrote: “We are off to a busy start on our first full day in Toronto! Ripley’s Aquarium and the CN Tower. Now a quick slurp of ramen (Tomás’ request) in the Distillery District which is also hosting a Christmas Market with vendors.”

I spent an hour on the phone with Apple last night to find out why photos taken with my iPhone are not automatically appearing on my laptop like they used to. Even then the pictures which I took recently did not appear. But, the technician assured me that they would eventually appear. Finally, this morning they have appeared. So, I will be able to report on the wonderful memorial for Ralph last Saturday.

Happy Thanksgiving to All!!
Barbara

Kirsten wrote tonight, “Tomás was excited to use a saber tonight at fencing.” 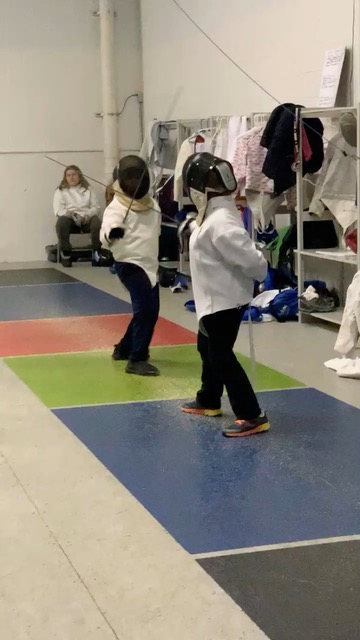 Tommy is the fencer facing the camera with the solid black shoes.

I am always amazed that Tommy looks so grown up.
Barbara

Paco is playing the finale/reprise of “Mambo!”. 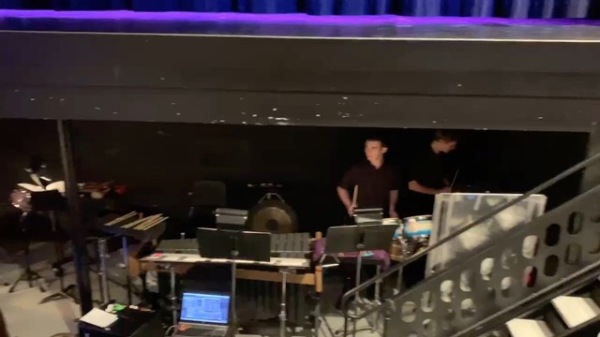 Thie was a video which I don’t know how to post for readers to play.

Thanks, Kirsten! You caught pictures where the light seems to be all focused on Paco.
Playing the drums has been a great outlet for Paco’s becoming an active high school student.

Here is the photo of Ralph which should have gone with his obit in the next entry:

As I wrote the Nov. 17th date above, I thought of my late nephew, Jim Canty, who was born on this date in 1963, and died of ALS at age 40 1/2. I am also thinking of his family, widow Bridget Canty, and children Ryan and the newly married Erin Boule, mother Pat, brother Tim III, and sister Kathy Canty Brown.