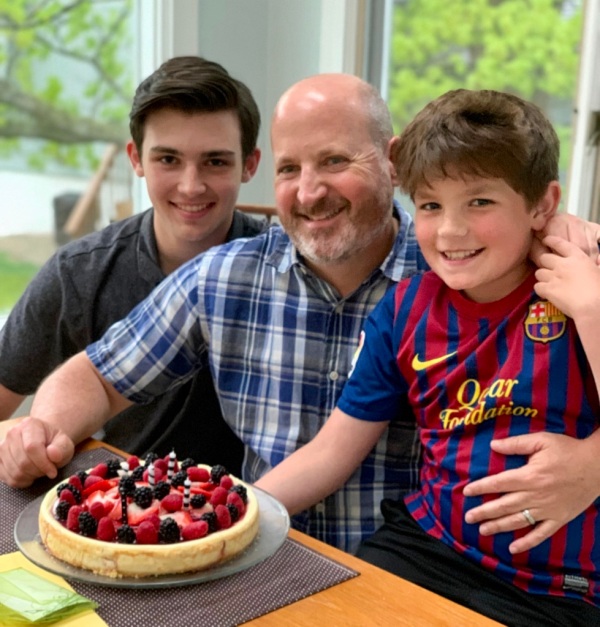 Paco, Steve, and Tommy at their birthday eve celebration of Steve’s 50th.
Kirsten made the berry cheesecake. It was ricotta and cream cheese with almond crust from the Once Upon a Chef cookbook.

They will continue the festivities this Sat. when all of the Traverse City Haases travel to Grand Rapids to meet up with Steve’s twin sister Debbie and her family for late lunch and her son’s soccer game.

Clark is delighted to report that after 3 weeks of trying, he finally got his 2 bothersome teeth pulled. He had been very anxious about it because he was afraid that the oral surgeon might not be willing to pull them. But, all went smoothly. They connected him to an EKG to monitor his heart and his blood pressure remained normal. Dr. Gallia had the teeth out in no time.

Clark feels fine. For dinner he had a can of luke warm tomato bisque soup, some mashed potatoes, lemon pudding and later some ice cream. He is supposed to keep the area iced, but he thinks that there is no swelling and it has stopped bleeding. 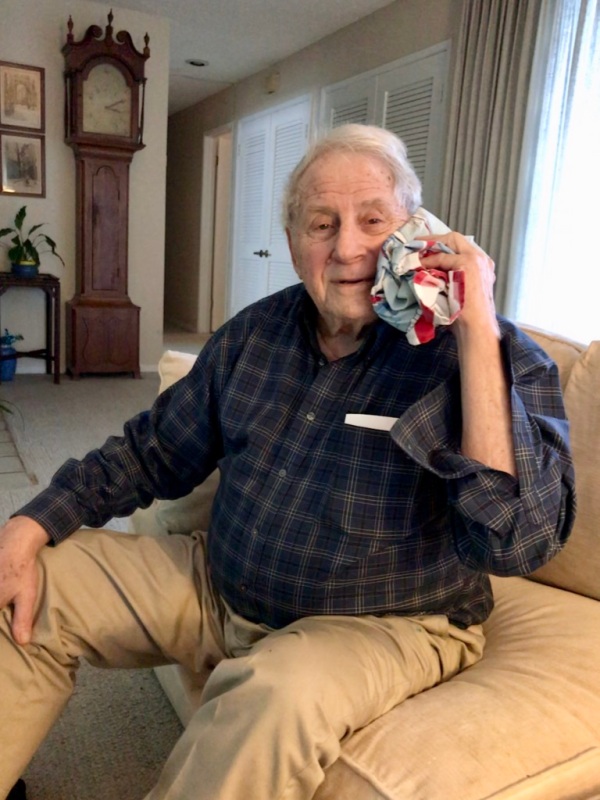 Clark is supposed to put an ice pack on his jaw for 20 min every hour.

Clark is so happy to have the extraction over with. Next is the cardioversion a week from Thursday, May 30th, at 7:45 am at Sutter General Hospital.

I was so busy reporting about Clark last week that I did not post these pictures which Kirsten and Steve sent about Tommy’s playing soccer and Paco’s playing baseball.

Here are some pictures from Tommy’s games a week ago Saturday in Sutton’s Bay (22 miles /25 mins north of Traverse City:

Tommy is throwing in the ball from out of bounds. 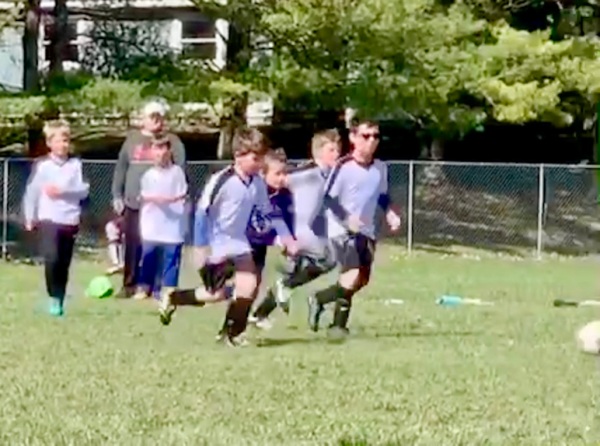 That is Tommy in the center of the photo. 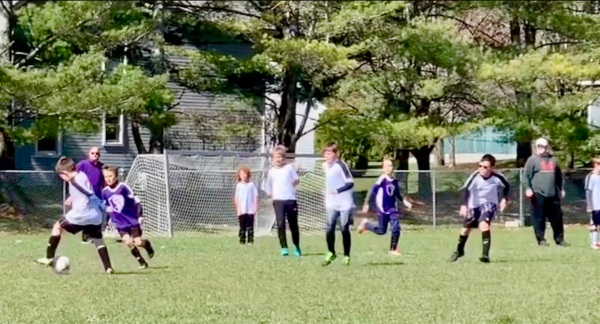 That is Tommy on the left trapping the ball.
It is nice to see Tommy so active in a sport. 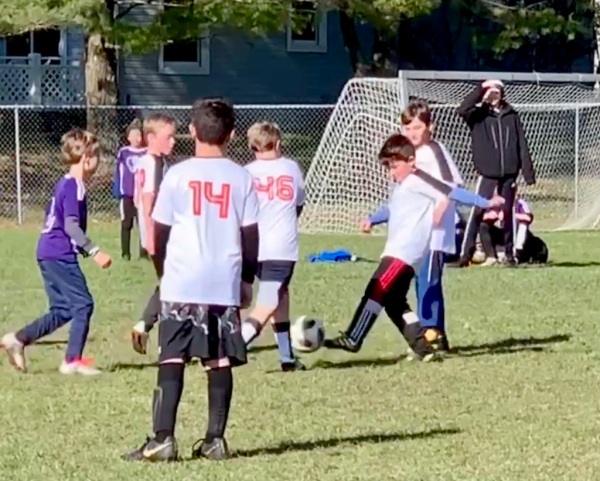 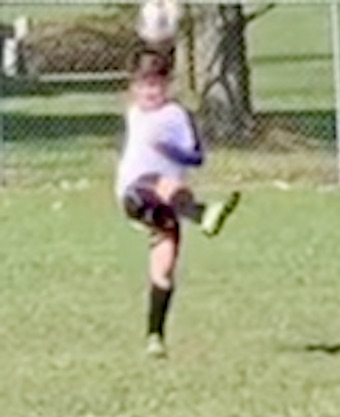 A bit grainy, but good action. 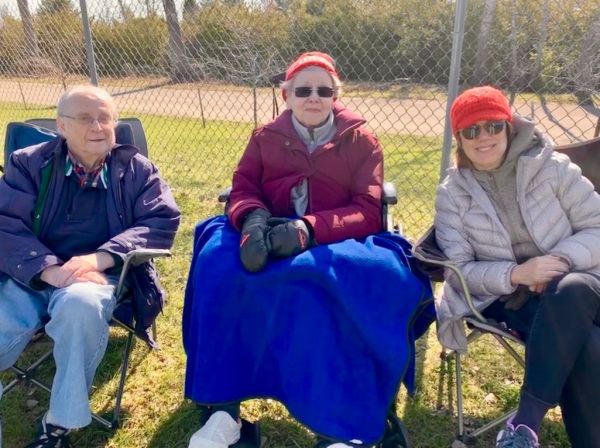 Here are some pictures from Paco’s game last Tuesday night. The Petrosky Northmen were a tough team. 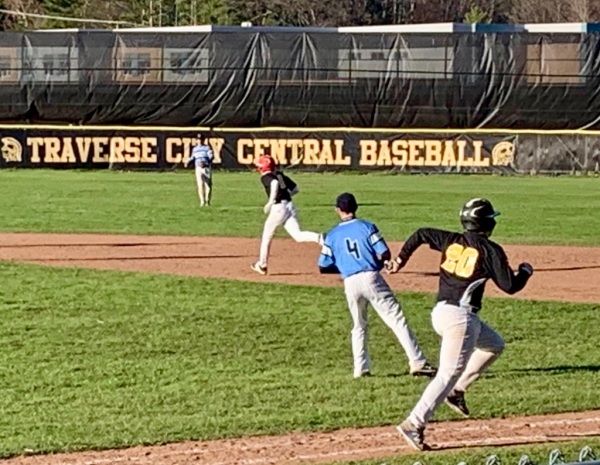 Paco headed to 1st Base. 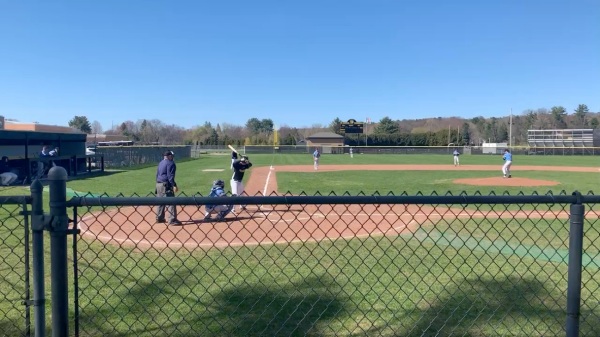 Paco walked, but it was fun to hear the crowd over the wind.
Kirsten said not to let the blue skies fool you. She had on a jean jacket, a spring jacket, and a down jacket, and she was still cold.

A couple of these photos were videos. Wish I knew how to post a video!

Brandon and Lisa took me and Joleen (Lisa’s Mom) to dinner at Zócalo in University Village. I had their ceviche with shrimp and white fish which is my favorite dish there. Beckett gave his mom and both grandmothers Mother’s Day cards. 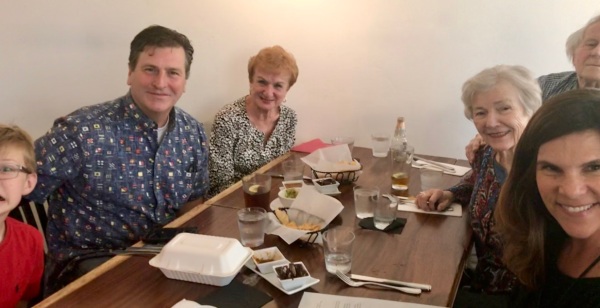 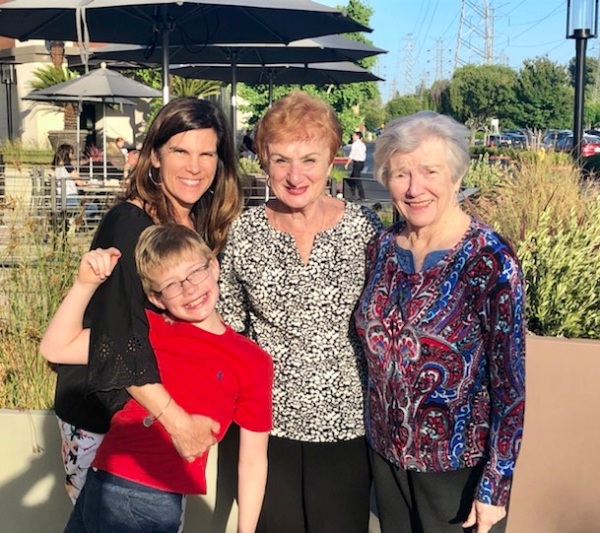 Beckett with Mom Lisa and Grandmothers Joleen and Barbara at the Menchie’s, the nearby yogurt shop.

Dave Smith, oldest of my sister Joan’s 5 children visited us tonight. He is the oldest of our 20 grandchildren. He was on his way from his sister Janet’s cabin at Tahoe-Donner to pick up Muffy (his partner) at the Sacramento airport. (They live in Portland, OR).They are spending the night at Janet’s in Lodi, then are headed for Yosemite in the morning.

Dave, a runner and cyclist, had a heart attack in his early 50s and had a 4 or 5 way bypass. So, he and Clark had lots to talk about. Dave has an Apple Watch. Clark put his finger on the watch band and Clark’s recent EKG showed up! It also said he likely had AFib.

Dave’s cardiologist put him on a paleo diet. So, we compared notes between paleo and keto. Paleo allows fruit and honey and maple syrup which the keto diet does not. Keto allows lots of whole fat dairy, which paleo does not. Keto restricts carbs much more than paleo.

When Dave was backing out of the driveway, I realized I hadn’t taken a picture. So I ran out to his car and he came back in and took this selfie of the 3 of us: 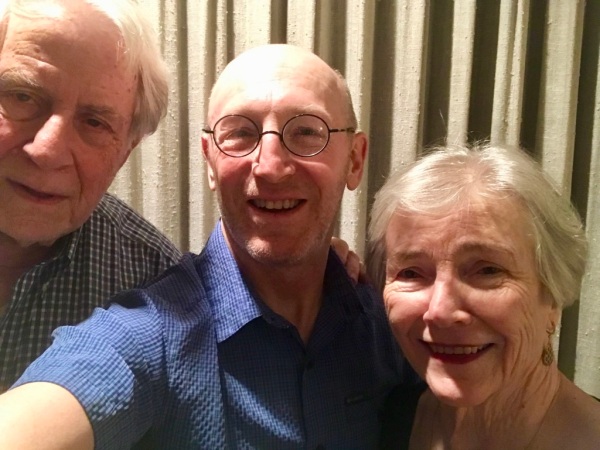 Thanks for the visit, Dave!

This afternoon we went to see Richard Ericson, MD, cardiologist for Clark’s son Jim, whom Jim’s wife Deb highly recommended. He was excellent. Much younger than I expected. 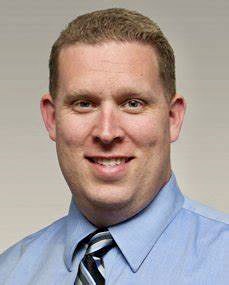 He said that when Dr. Allison listened to Clark’s heart in Dec. 2018, it did not show AFib. So, the Afib has been going on for less than 5 months. He asked Clark if he had been more tired in the past few months, and Clark decided that he had. Otherwise, he has shown no symptoms of AFib.

It is best to try to get the heart back into its normal rhythm as soon as possible. He suggested that Clark get the teeth pulled soon. And then within 3 weeks Dr. Ericson will do an Electrical Cardioconversion in the hospital. Cardioconversion is the delivery of a jolt of electricity to change the rhythm of the heart back to normal. At the same time he will do an exam of the heart through the esophagus to make sure there isn’t a blood clot there.

The doctor’s aid tried to schedule the procedures before we left his office today. But, the scheduler on the hospital end was off for the day.

Clark’s blood pressure was high 151/81, pulse 60. So, the doctor put him back on Amlodopine, one of the blood pressure medicines. Clark will continue on Eliquis, the blood thinner. Clark just has to not take the thinner the night before or the morning of the tooth extractions.

Thanks for the recommendation, Deb!!
Barbara

I am happy to report that Clark returned to the bridge table tonight for our regular Thursday night game at the Sacramento Bridge Club. We didn’t do particularly well. Our 48% put us in 8th place of the 12 pairs.

Part of Clark’s dismissal orders yesterday were to call his internist right away in order to get a referral to a cardiologist. So, I called this morning and got an appt with his internist, Dr. Samuel Allison, whom Clark has been seeing for years. Dr A. seemed somewhat surprised that Clark had felt no symptoms of the a-fib and still feels fine.

He went over the echocardiogram with us and even printed out a copy of the results for us. He took Clark’s blood pressure and the upper one was 126, but the lower one was fluctuating all around because of the a-fib. He agreed with the Hospitalist that Clark should go off all blood pressure meds and just take eliquis, the blood thinner.

He gave us a referral to, Dr. Richard Ericson, the cardiologist whom Clark’s son Jim sees, and whom wife Deb highly recommended. So, we are waiting for that appt.

Dr. A was surprised that Clark had such a reaction to taking 1 dose of lipitor a year and a half ago. Dr. A had never heard of such a reaction. Clark was completely confused and didn’t know where he was and kept asking what the contract was when he was declaring a bridge hand. Then a week later Clark was dizzy at bridge and hung onto the furniture and slipped. The doctor is wondering if maybe Clark had had a slight stroke then, and so prescribed an MRI which we are also waiting to hear about.

The dismissal instructions said no caffeine. But, Dr. A. said it was fine. When I asked about Diet Coke, he said sodas are bad because of the phosphoric acid which is bad for your bones.

In spite of the last 3 days, Clark feels fine!

I arrived at Sutter Hospital about 11:30 am this morning and found Clark eating his lunch consisting of 3 oz tri-tip in sauce, a medium baked potato, margarine!, 4 oz of carrots, 1% milk, and raspberry sherbet. .. not very LCHF (Low Carb High Fat) compliant. Clark ate the steak, half of the potato (no margarine), and the steak.

He had had an echocardiogram this morning but the cardiologist had not come by. A few hours later, Dr. Xu (pronounced “shoe”) did come by and was very thorough at explaining what was going on. He said that a-fib is common as we grow older and is especially common among people in their 80s. He explained that with atrial fibrilllation, the upper chambers of the heart are quivering and not pushing out the blood all at once. There is danger of blood clots forming leading to possible stroke.

Clark is going to take eliiquis, a blood thinner, for the a-fib. And he will stop all 3 of his blood pressure medicines. Dr. Xu said that Clark can have teeth pulled as long as he stops taking eliquis for 48 hours before. Dr. Xu said that Clark could go home, but he didn’t write the release, so we had to wait another 2 or 3 hours to get the release.

Clark is happy to be home!

We were up at 5:45 am this morning to go to a 7 am appt with the Oral Surgeon a half a mile from here. Clark needed to have two molars pulled. In the waiting room Clark was given a valium and was told to chew it and drink water. Then the aid took him to have his teeth pulled. About 20 minutes later the assistant came back out to the waiting room and told me that they were not going to pull the teeth.

Clark’s blood pressure and pulse were too low: BP = 98/57 with a pulse rate of 49. The Oral Surgeon is also an MD and he wanted to know who Clark’s doctor was. He called Clark’s internist and they concluded that they should call 911 and take Clark to the ER. A fire dept. ambulance came as well as a fire truck with a total of 6 EMTs. I rode in the front seat of the ambulance and Clark was on a gurney and we arrived at Sutter General Hospital about 8 am.

They did an EKG and a chest X-ray. A few hours later the ER doctor said that Clark had a-fib. And they were calling for a cardiologist and they were going to admit Clark to the hospital. Another hour or so later the Hospitalist doctor came by – (a physician and especially an internist, who specializes in providing and managing the care and treatment of hospitalized patients).

Clark recognized the doctor’s name as being a doctor who attended Clark’s wife when she was hospitalized 13 years ago! The doctor remembered the name Muldavin. The Hospitalist said that atenolol, one of the medicines which Clark takes for high blood pressure, can cause lowering of the pulse rate. So, maybe the cardiologist will adjust the medicines.

In the late morning, Clark’s oldest son, Jim, arrived. Then a little while later, daughter-in-law Anne come to visit. She is the wife of 3rd son, Dan. Soon after, 2nd son Scott arrived. 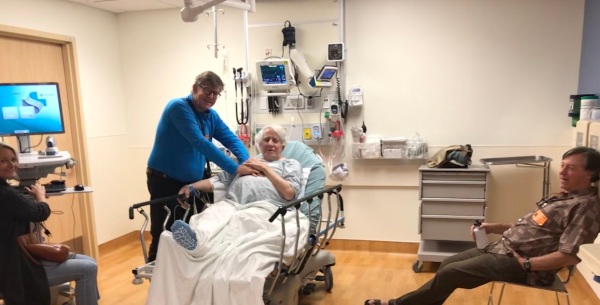 Clark in the spacious ER room surrounded by Anne, Scott, and Jim.
Clark feels fine and had no idea of any heart problems. 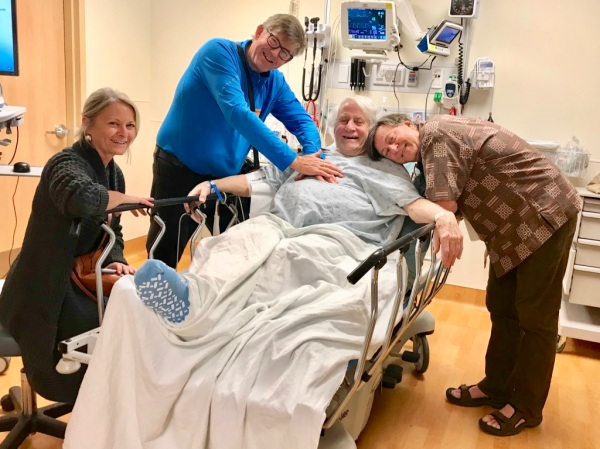 In the late afternoon Scott gave me a ride to the oral surgeon’s office where I picked up Clark’s car which we had left in the surgeon’s parking lot. About 6 pm I went back to Sutter where Clark had been moved from the ER to a hospital room. He was in the middle of having a dinner of chicken, sweet potatoes, and green beans. Clark was hungry, not having eaten since 8 pm the night before.

A little while later Jim showed up with wife, Debbie. And soon after that son Dan arrived. The cardiologist never did show up, so maybe that is a sign of a non-emergency event. 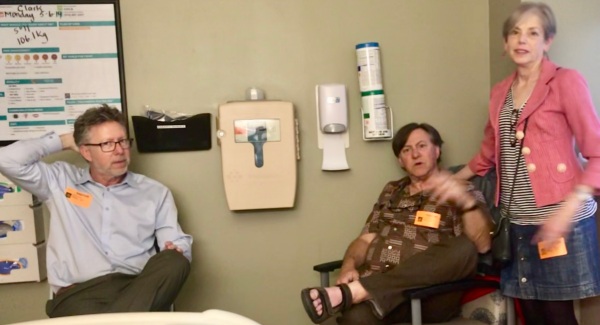 The day took a very different turn from our plans.