(This is a re-do of a blog that I posted yesterday with enlarged pictures.)

On Thursday Clark and I went to Stockton to visit my friend Joanne Donovan in her new home at O’Connor Woods, a beautiful place for Senior Living. Joanne and I were apartment mates for only 7 months when we were both teachers in Sacramento. I broke my leg skiing in March 1961, and by the time I returned to Sacramento 10 months later, Joanne was about to get married. But, we have remained good friends all of these years.

Joanne and husband John raised 4 children in Lodi. Joanne, now a widow, is almost 5 years older than I, and she decided it was time to sell her 5 bedroom house and make the move to an apartment at O’Connor Woods. Here is the sign in the lobby of her section of the building: 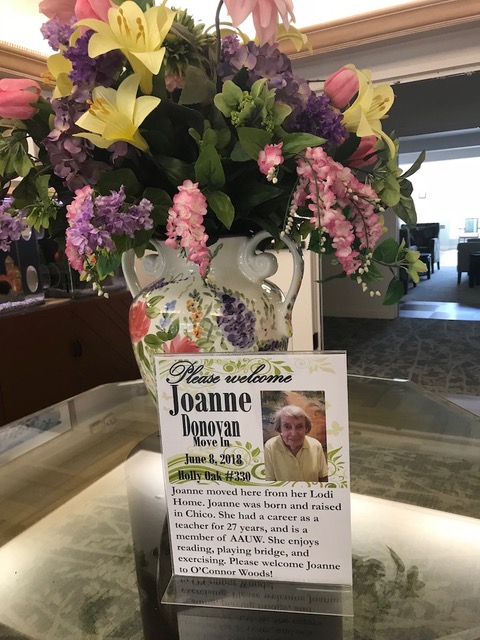 Joanne in her new home

The public areas are beautifully decorated. And Joanne’s 2 bedroom, 2 bath apartment is spacious. I got remodeling ideas for our guest bath.

Joanne hosted us for lunch in the large dining room. For lunch there was a choice between 2 soups. I chose gazpacho which I hadn’t had in years and have never been too crazy about, but this was wonderful with large chunks of vegetables in a room temperature tasty broth. Then there was a shrimp and avocado salad, and for the entree I had the best tilapia I have ever had. It was golden brown, with no sauce, just the way I like it. It was accompanied by zucchini. Clark loved his meaty enchilada. The choice for dessert was flan or bunny tracks ice cream which I skipped.

Clark always comments on how sharp Joanne is. She is a great conversationalist, reads the New Yorker magazine, and keeps abreast of what is going on in the world.

Thanks, Joanne, for a delightful day.

Thanks to all who sent cards, emails, and electronic cards.

I celebrated by playing bridge with Sharan Fleming, my regular Friday partner, and we had our regular bottom score. Her birthday card (on the left) was very appropriate. It said, “As we get older, we realize it isn’t about winning or losing … It’s about learning to stay awake during the game!” So, true. With 2 rounds to play, I was dying for a nap.

I came home and tried to sleep, but couldn’t. So, Clark and I went to pick up an adjustable chain that he had ordered for my birthday. We were at the jewelry store for quite awhile. Then we headed out for dinner, and when I tried to use my phone to make a reservation, I realized that the blue tooth wasn’t working, which is supposed to connect my phone to my new hearing aids. The right hearing aid was missing! We made a U-turn and headed back to the jewelry store which was due to close in 15 minutes. It was no where to be found. So, we headed home and I found it on my pillow!

Yesterday I forgot to wear the hearing aids during the day when we went to see my friend Joanne Donovan in her new surroundings in Stockton. Then last night, I forgot to open the battery holders to turn the aids off. So, they were connected to the batteries all night.

Thanks all for the memories of Grandma. I will work on the gluten free version of her scone recipe.

Rereading this reminded me to send the attached photos of Rockford University.

Sydney and Milan are preparing for their 9th season of synchronized figure skating. Their team competed at the National Championships in Rockford in February 2017 and I took the photos on a brief visit on the way to the arena. I couldn’t get the girls in the shot as they were with the team and the team schedule was too tight for a detour.

2018 championships were in Portland. Dave and Muffy got to see the team take fourth place. Medals are awarded for the top four places so the their team was on the podium!

Thanks for the great story about Mom!

I had always thought that Mom taught at Dominican College in San Rafael. In doing some Googling, I came across this 1889 ad for the College of San Rafael which was run by the Dominican nuns and later was called Dominican College and is now Dominican University. http://contentdm.marinlibrary.org/digital/collection/pssr/id/1xx

Dad presumably was working at the then location of St. Mary’s College in Oakland at Broadway and Hawthorne. I have two doctors in the medical office building across the street and have noted that the old auto dealership building was torn down and there is now a huge construction project on the site. I have wondered what happened to the plaque that Dad had installed near the entrance on Broadway to the auto dealership building, commemorating the site of the old St. Mary’s College.

I vaguely recalled that the Oakland site for St. Mary’s was called The Brickpile. Googling turned up this website which has a photo of the plaque that Dad had installed in 1959 for “The Old Brickpile.” It has an interesting photo of the damage done by the 1906 Quake. Saint Mary’s College – Oakland – LocalWikixx

Today on Mother’s Day I am thinking of my mother, Maxine Ferguson Canty, who was born on May 1, 1905 in Macomb, IL, daughter of Frank Ferguson and Fanny May Corlett. Her parents were music teachers at Macomb Normal School in Macomb, IL. They had met in Rockford, IL, and Maxine grew up as an only child in Rockford, graduating from high school at age 16 and from Rockford College in 1925 at age 20.

After her graduation Maxine became alumni secretary of her college and met Tim Canty in about 1930 at a meeting of alumni secretaries in Canada. Tim was the Executive Secretary and founder of the Alumni Association of St. Mary’s College in Moraga, CA. They were married on August 9, 1933 at St. Leo’s Church in Oakland.

After her mother died in 1930, Maxine had moved to California with her father Frank. Maxine taught English at the College of San Rafael and received her Masters degree in English from the University of California at Berkeley in 1932. While awaiting my birth in 1934, my mother wrote a serial for the San Francisco Call Bulletin newspaper entitled, High School Tragedy. Soon followed the births of Patricia, Joan, Tim Jr, Jim, and Bob.

For some reason I was thinking of the fact that Mom used to make Scotch Scones, so I made some this morning. My grandfather, Frank Ferguson, lived with us during the War from about 1941 until he died in Nov. 1943. He sold Watkins products door-to-door. For the scones I used a recipe from Mom’s Watkins cookbook. I remembered that Mom’s scones had sugar on them; these didn’t. So, I called my sister Joan tonight and she had a similar recipe, but with cinnamon sugar sprinkled on top. Here is the Watkins recipe with cinnamon sugar added:

Hope you all had a Happy Mother’s Day.
Barbara

Tonight we put my grandson Wheeler on a plane headed for Santa Barbara with a transfer in Burbank. He will join Colleen and Deke in the Santa Barbara area. He had stayed with us for 2 weeks so that he could go on a camping trip with 6 friends this past week-end. They had planned to camp at Rancho Seco, but when they got there, they discovered that they needed reservations which they did not have.

Fortunately, one of the fellows had parents with a condo at North Lake Tahoe. So instead of camping outdoors, they stayed at the condo having taken a lot of camping gear that they didn’t need.

We employed Wheeler and his long arm to take this selfie of the 3 of us:

Have a fun time in Southern California, Wheeler!

Yesterday I decided to throw out 2 bottles of drinks which Colleen had left here last year which had expired. I was going to just throw them unopened into the garbage, but the recycling gods told me to empty them and throw the empty bottles into the recycling bin. I struggled to open a bottle labelled Synergy organic kombucha, and it started to leak a little, and then …POP, a sound 5-10 times louder than any champagne bottle I have ever heard pop. 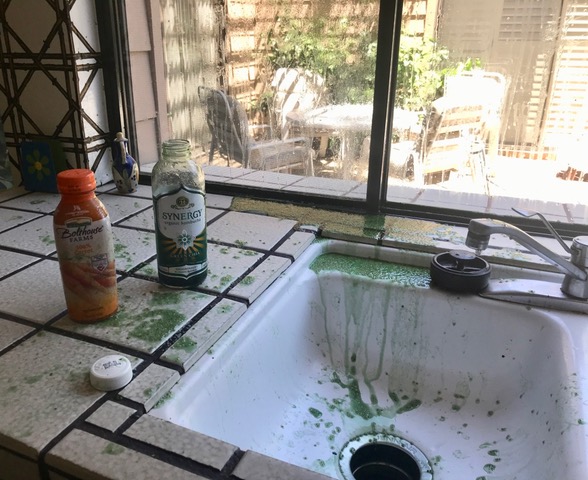 Green chia seeds shot up to the ceiling 6 feet above. There were green seeds all over the windows. They even landed on the coffee pot 6 feet away to the right.
The bottle top hit the tile and chipped off 2 small pieces in the lower left corner. Fortunately, you would have to be looking through the window from the outside to see the chipped tile. 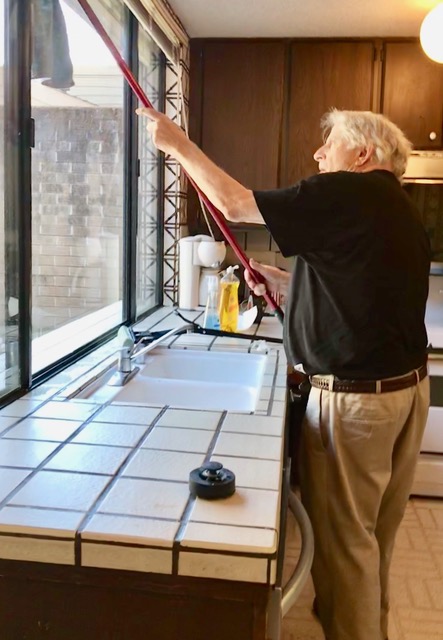 Clark used a mop and towel to clean the mini-blinds and the windows.

I had just heard of kombucha tea for the first time last week. The bottle says that it is a fermented tea that has naturally occurring alcohol. After fermentation, it becomes carbonated. I must have shaken the bottle as I was trying to open it.

When Clark came out to the kitchen this morning, I noted that we were both dressed in Khakis and a black T-shirt. Clark said, “Yes. A Giant and an All-Star”. I am washing the shirts so that we can wear them to watch the All-Star game on Tuesday. 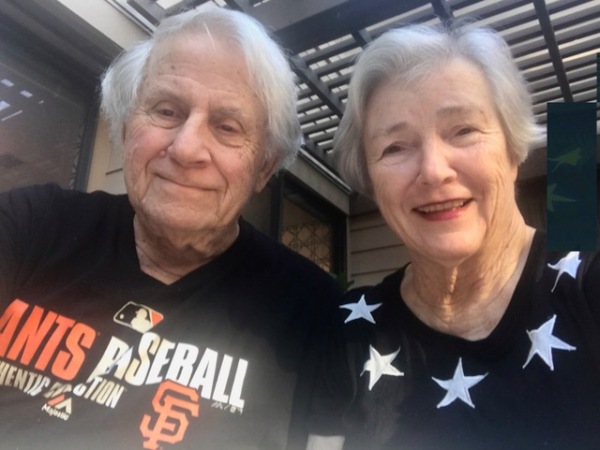 Clark, the Giant and Barbara, the All-Star

Clark and I went to his son Jim and wife Deb’s house for dinner tonight. I thought that it was going to be just the 4 of us, but there were 11 of us. Jim barbecued hot dogs, hamburgers, and sausages. Others brought side dishes. I was glad that I happened to bring a salad.

A couple of days ago my sister Patricia wrote: “I was just reading an article in Time magazine about Justice Kennedy and these words really caught my attention: ‘. . The moderation that gave heart to liberals has roots in Kennedy’s upbringing in the cozy neighborhood of Land Park in Sacramento, a picture-perfect family enclave in mid century California.” Clark’s son Jim lives in that picture-perfect neighborhood, doesn’t he?”

Jim and Deb do indeed live in the Land Park neighborhood. Erin was married in the park itself. Today the house next to Jim and Deb was decked out with flags: 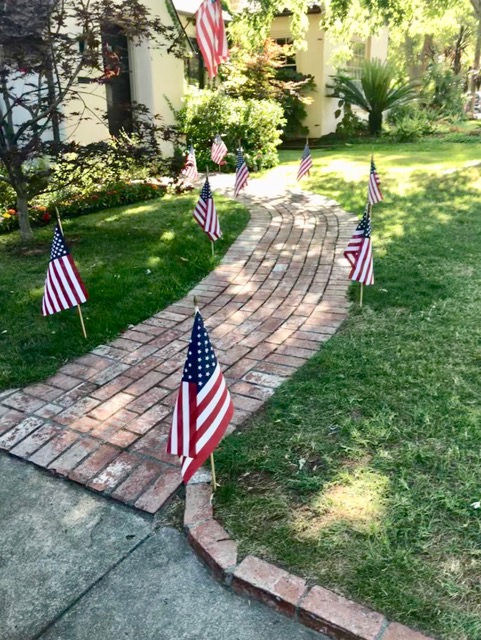 Here is Jim, the oldest of Clark’s 4 sons:

Barb and Clark
It was a delightful evening but, by the end of the evening I was shaking because I was so cold even though the temperature was still 65. There was a slight breeze that made it seem colder.

Jim Deb Barb Clark
Thanks, Jim and Deb, for a delightful evening.

Note: It was on July 4th of 2009 that Erin was diagnosed with the glioblastoma and given a probable 15 months to live. She lived almost 8 years.

Happy 4th to all,
Barbara