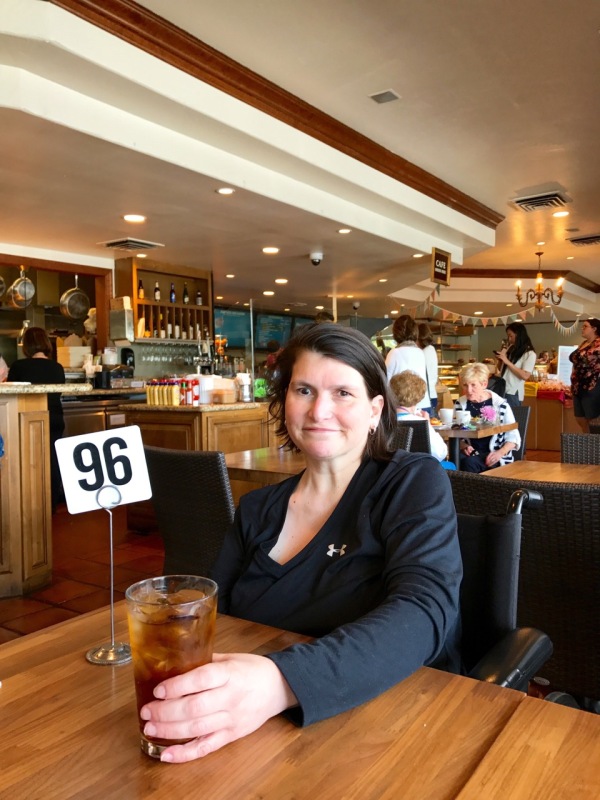 We had a busy exhausting day today. On our way to lunch we made a stop at AT&T so that I could use their kiosk to pay Erin’ s wireless bill for her with an electronic debit. Then we went to lunch at Ettore’s. Erin ordered the meat quiche with fruit and greens. She put her fork into the quiche and decided that she couldn’t eat it. So, we brought her lunch home for another day.

We had time to come home and rest for an hour before Erin had a 2:30 pm appointment with her optometrist at Kaiser, Dr. Fong. In the waiting room, she was trying to describe to us where she wanted to stop for food on the way home!

Dr. Fong spent about 40 minutes with her. Her prescription had not really changed in the 2 1/2 years since she had seen him. Her right eye wanders when she first looks at something, so she sees double. But, after a few seconds the eyes come to focus. Normally with double vision a prism is prescribed. But since Erin’s double vision is spotty, Dr. Fong didn’t think it wise to prescribe a prism.

After the eye exam we waited quite a while to get her glasses adjusted. They were wildly out of whack. We should have had them adjusted before she saw the doctor. From there we went to Chase bank because when we tried to access her account on line last night, I had mistakenly put in the password multiple times with the keyboard on Caps lock. The result was that the account became locked. I was afraid that the electronic debit might be affected. (It wasn’t.) But, the nice fellow at Chase got her account unlocked.

Then, at last, we went to Del Taco where Erin wanted two bean burritos to go. She is contentedly having a burrito and watching TV in her room.

The Sleeping Beauty was wide awake this morning when I took her thyroid pill to her about 9 am. For the past 2 weeks or so, Erin has pretty much slept round the clock, except for a brief outing last Tuesday.

For dinner tonight Erin wanted to go to Cafe Bernardo and have their pork quesadillas. Then she suggested going to nearby Talbot’s, but it was closed. So, she suggested going to the new Raley’s which opened about 10 days ago. This was her first visit to the store. She found a few items that she wanted. That is Clark up in the front by the windows, appreciating chairs to sit in while Erin and I shopped.

Customers can order salads and sandwiches and then take them up to the balcony where there is a microwave and tables and chairs with a view of the store.

Today we went to lunch at Bella Bru in Carmichael a few blocks from where we lived from 1979-1989. Bella Bru started out as a small bakery and coffee shop in the 1990s. It has been remodeled since we were last there about a year ago, and it now sports a small wine bar. Erin had a salmon BLT of which she ate about 2 bites. That is my orzo salad with grilled salmon in the foreground.

I had suggested Bella Bru so that afterwards Clark could get a haircut at Barber Joe’s about a mile away. Barber Joe’s is where Brandon Sr and Brandon Jr used to get their haircuts when we lived in Carmichael from 1965 to 1989. I was always grateful to a former barber there who had suggested to me in 1988 that Brandon Sr should be eligible for disability. It was because of his suggestion that Brandon and I ended up with Social Security and Medicare based on Brandon’s part time teaching and writing of Math books.

When we came out of the barber shop, Erin had her window rolled down and was waving cash in her hand. She wanted us to pick up a pizza 2 doors down from the barber shop. We tried to talk her out of it, but she was insistent. So, she waited another 15 min. in the car for the pizza. When she got home, she ate 1 or 2 bites of it, and hasn’t touched it since.

Erin had not asked for pain medicine at all recently, but asked for it 3 times today. Her neck is bothering her.

At the last minute I decided to cook Easter brunch and Brandon and Beck came. Lisa and her Mom were making appetizer’s for Lisa’s family gathering this afternoon.

Erin had been sleeping heavily, and I didn’t think she would get up, but she rallied at the last minute.

Happy Easter to all!!
Barbara