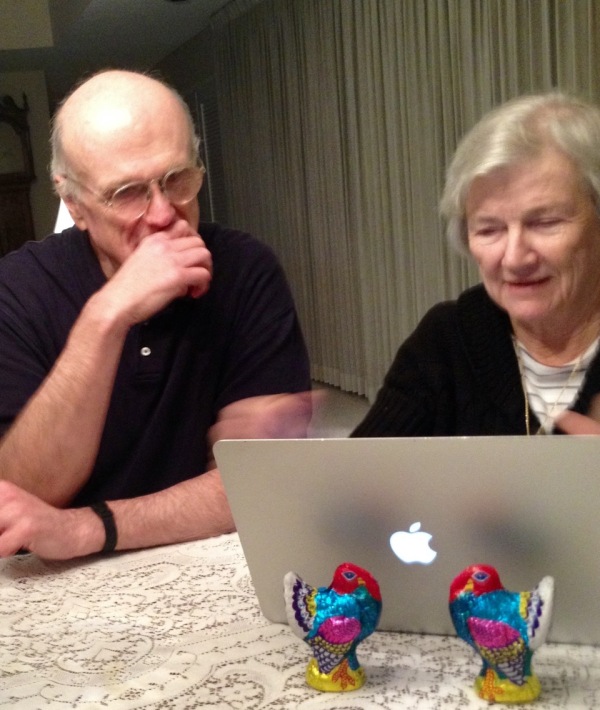 When I woke up this morning, it occurred to me that maybe my brother Bob, who lives in midtown, would like to come and share our turkey breast dinner. Clark took this picture of Bob and me after dinner with my See’s turkey centerpiece.

Erin was too tired to get up and elected to sleep instead of joining us for dinner. In fact, she has slept all day.
Barbara

The drug that might be used to treat Erin’s desmoid tumor is tamoxifen, not Gleevec.

Erin suggested that we go to a new place, Mod Pizza, for our lunch out today. It is located right on Howe Ave, next door to Chili’s in the Howe about Arden shopping center.

It was a little confusing at first. But, I guess that the idea is you can compose your own pizza or salad from a salad bar. You pay a flat prize for a Mini Pizza ($5.29) or a Mod Pizza ($6.97) and then as you go through the bar, you have the employee put whatever you want on the pizza. Erin had a Mini and Clark and I shared a Mod and it was just about right. My half of the Mod had pesto sauce on the bottom and veggies and cheese on top, Clark’s had tomato sauce with lots of meat and cheese. Clark thought that the pizza was pretty good.

Afterwards, Erin wanted to go to CVS to get sundries, so we spent about a half hour there. Now, we have a clean house and it is nap time!
Barbara 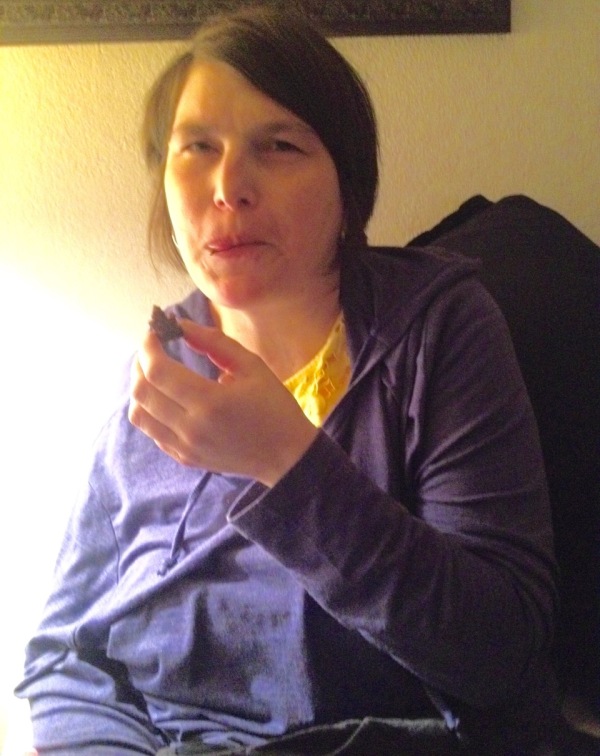 We were able to move Erin’s appointment with Dr. Lee Morse, the musculoskeletal specialist at Kaiser in Oakland, up to 11:30 am today. Dr. Morse says that the mass on the back of her neck is a benign desmoid tumor, or fibromatosis. It is not a cancer, and it is not related to the glioblastoma. He said desmoid tumors are tough. It used to be that they removed all of the desmoid tumors by surgery, and they have to remove a good margin around the tumor. But, Dr. Morse said that there is about a 50% recurrence, and then you have to go back in through scar tissue when operating again.

There has been some success with using a drug called Gleevec which is used in breast cancer treatment. (I looked it up and it is only about 37% successful.) He is going to contact an oncologist in Roseville here to work with Erin on the Gleevec.

The MRI which was done here on Oct. 26th revealed an “avidly enhancing mass” which was 60 mm x 25.7 mm or about 2 1/2 inches by 1 inch. I actually measured it quite a bit larger than that, being bigger on the outside than on the inside. And it is very hard and solid. The Medical Assistant asked Erin what her pain was on a scale of 0 to 10, and Erin said 4. Sometimes it throbs, but most of the time it doesn’t.

Last night Erin wanted me to make a batch of brownies from a Ghirardelli mix, but it calls for an egg, and we were out of eggs. After a day of driving today, Clark went out and did some grocery shopping including eggs, so I made a brownie batch tonight. Erin is shown eating one.

Erin just announced to us (at 3am) that the election of Trump has made her angry enough to play bridge!

At 8 am this morning I had a text message from Steve saying that Paco had bowled a 265! There was a crowd cheering him on after the first 5 strikes. That PH in the left margin stands for Paco Haas. Looks like his teammates had 69, 83, and 80.

Last night Erin complained that the bump on the right side of the back of her neck was bothering her. It seems larger. It is about 4 inches by 2 inches and over an inch thick, and very hard to the touch.

So, I wrote Dr. Cua (the neck specialist here) last night telling him that we had not heard from Dr. Morse, the musculoskeletal oncology specialist in Oakland. Early this afternoon Dr. Cua messaged that Erin was in Dr. Morse’s file. A short time later I got a call from Morse’s receptionist.

Erin seems more comfortable today and wanted me to go out at 9 pm tonight (during the World Series) for some kind of Ben and Jerry’s ice cream, but she couldn’t describe the flavor. She finished off some Breyer’s vanilla instead.