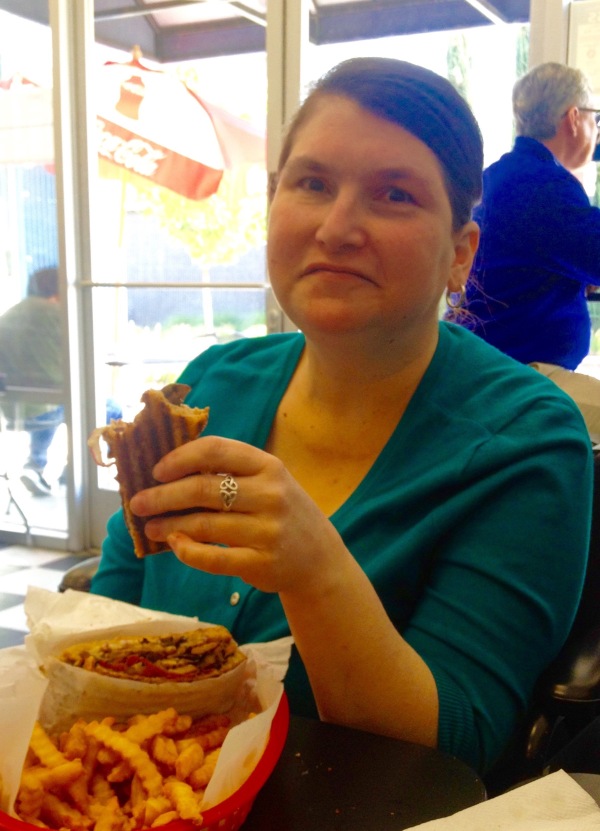 For our Tuesday lunch out today we went to a little hole-in-the-wall, called Dad’s on Folsom. We have walked by it a lot in the evening when we go next door to What’s the Scoop. I expected a tottering old man behind the counter. Instead there were 5 young Vietanamese workers busy producing sandwiches as they were ordered.

We walked in just as 5 men from nearby SMUD (Sacramento Municipal Utility District) arrived. There was one other couple eating. By the time we left, every table was taken. There were 20 people: 16 men and 4 women.

When I got home, I looked on the internet and found out that there is a Dad’s on J and a Dad’s on S, both downtown. Erin enjoyed her Lockdown sandwich: chicken, bacon, and mushrooms, and her fries.

Afterwards, we walked nearby to Office Max, and on the way back to the car thought we would pick up some Gunther’s coffee ice cream at What’s the Scoop, but alas, we were too early. It doesn’t open until 1pm.

Colleen is returning home to Boulder tomorrow, so when she stopped by tonight to say good-bye, we celebrated her birthday a week early. Erin wasn’t in the mood to be in the picture. Colleen and Wheeler had gone to a movie and dinner after he got out of class, and she had dropped him off at the motel, before she came over to say “Good-bye”, so he wasn’t available for the picture.

Colleen is about to blow out the candles. When I suggested that she and Wheeler drop by for some Ettore fruit tart, she didn’t realize that it was going to be a birthday celebration.
It was nice having her in town for a few days.
Barbara

I have been unsuccessful at trying to post the video of Paco bowling. I was able to send the video from my messages to my own email, but when I try to send it to the blog’s email, the attached video doesn’t appear.

Colleen says that the free blog doesn’t allow videos and that I have to use UTube which I don’t know how to do.

Sorry if you have been trying to view the video. The necessary arrow to press on doesn’t appear. 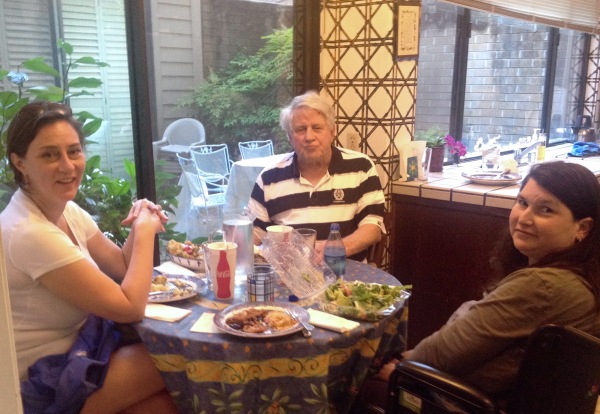 Colleen was at Arden Fair and sent a text saying that she that on the way home she was going to pick up a sandwich for Wheeler at Bruchi’s and was wondering what she could get for us. She brought home a Philly sandwich for Clark and Caesar salad for Erin. (I was going to eat leftovers.) And while she was waiting at Bruchi’s, she went next door to Mel’s to get a couple of requested shakes.

Since she can’t get See’s candy in Boulder, she stopped and got a custom box of See’s with pecan roll pieces which I couldn’t resist.

Wheeler and Erin are waiting for Colleen to arrive for dinner at Roxy. Even though we don’t see much of him, Erin loves having her nephew Wheeler in the house.
Barbara 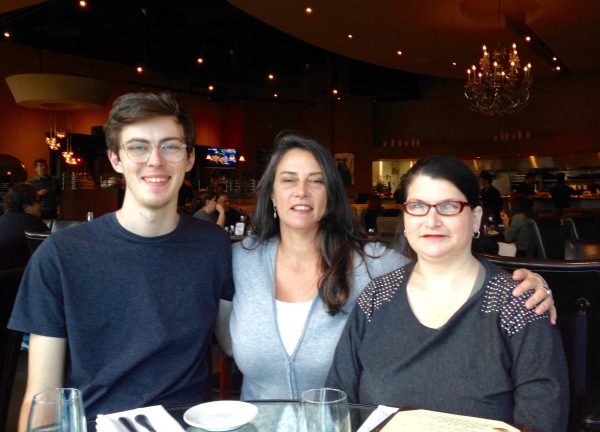 I received a phone call from Colleen last night while I was at bridge. She had made a surprise visit from Boulder to Sacramento for a few days. She had expected warm weather and brought shorts. But, today it was pouring rain in the morning, and as we left for dinner it was so windy and cold that I came back inside to get a jacket.

Roxy is one of Colleen’s favorite restaurants in Sacramento. My very rare salmon on a chopped salad was fixed perfectly. After eating a calamari appetizer, Erin had carrot soup, but didn’t even start on her turkey burger. We have leftovers for tomorrow!
Barbara

Tommy is giving Paco a pep talk before Paco’s bowling tournament this past weekend. I hope that I can post the video of Paco in action.Barbara

Yesterday for Tuesday-lunch-out we went to Bruchi’s which recently opened on Howe Ave not far from us. Bruchi’s features Phily cheesesteaks, subs, and salads. Erin really liked her spinach salad (and suggested this photo!) loaded with bacon bits, and liked her fries, and my albacore sandwich was on very fresh bread. Bruchi’s is a chain with lots of stores in Spokane and other parts of WA. Sacramento appears to be the only CA location. Prices are very reasonable, but you do have to order at the counter.

I bought a lobster lasagna at Costco on Monday, and Erin was anxiously looking forward to having it tonight. I also bought bok choy – about 25 heads of it. And Erin enthusiastically ate that, too. I turned around to cut up the first serving of bok choy for her, and she had already eaten it. She and Clark both really liked the lasagna. I could have done without the loose kernels of corn in it.

We had temperatures in the mid 80s today. I even turned on the air conditioner for awhile and wore sandals for the first time this season. Feels like summer!
Barbara

Erin’s phone now says that it is 100% charged. This morning I found an unopened cord from another device and it did the job.