Cristina, Erin’s Spanish teacher from San Jose, visited today. Erin took 2 years of Spanish from her at West Valley College in Saratoga, and also Erin and Steve took a Spanish Immersion weekend superivised by Cristina.  When Cristina got ready to leave, I mentioned that I had not heard them speaking Spanish. With that, Erin just rattled off sentence after sentence of Spanish with comments from Cristina.

Barb, you are right.  I am hearing about more medical terms than I ever dreamt of.

My teacher, all the way from San Jose, visited. She reminded what I can do. Seeing her was a gift. We find it sprays to be blue. But any chance to live we should.

I was without my Spanish. Today I found it.

Gathering for John and Pizza

Clark saw son Jim early this afternoon and said that Jim seems better.  His temperature is down a little and he was able to write his name.

Today is John’s last day, so we invited the Bay Area family to join us and see John at the Village Pizza and Grill in Davis where some of us had met 3 weeks ago.  This time there were 22 of us: my family with the exception of Wheeler, my sister Joan and husband Ralph and their daughters Janet and Ginny and son Alan and their families, my brother Jim, and John.

I hear John and Erin talking in her room. They were still talking at 1:30 am this morning, but John says tonight will be a much earlier bedtime, since he has long day of flying tomorrow.

We are so fortunate to have John here visiting these 4 days.  We were gone most of the day, and Erin planned for John to drive her to Davis to have lunch and spend the afternoon at her house with the boys and Steve. Miselka held the handles of the wheelchair and Steve and John used the wheels to lift Erin up the 3 stairs into the house.

Erin said Tommy kept coming and nestling his head in her lap. John said Tommy was making pretend pasta and getting water all over the house. Paco kept John busy playing Pokemon.

This morning Clark and I stopped at the hospital to see his son Jim who had been moved to the neuro-observation unit before we left last night.  Jim said “hi” to Clark as we walked in, and then peeked around Clark and waved at me. I thought he seemed much more aware than yesterday, though he was sleeping most of the time.  The neurologist came while we were there and she asked him to hold up 2 fingers, which he did.  She asked him his name, and though he couldn’t tell her, I thought that it looked as if he understood her question, not having the blank look that was really bothering Clark last night. She asked him if his name were Dave and he nodded “no”, and when she asked if he was James, he nodded “yes”. He couldn’t tell her how old he was, and then she turned to us and said that he was a little worse than yesterday.  That surprised me, both that she thought that and that she said that in front of him.

Jim went back to sleep, so we headed to Lodi for the memorial Mass and Celebration of Life for my friend Joanne’s daughter Mary who died in Dec., 2 days short of her 48th birthday.  Mary died of cancer of the bile duct, a rare cancer, but it is what my mother-in-law died of at age almost 101. There had been a Mass in SF in Dec., but this was for the locals.  When mass was over, the priest walked Joanne out.  I  had never seen that done before, and he said it was just a spontaneous thing he did. Joanne’s husband had died in Sept.

The celebration was at the Bare Ranch on acres of grapes owned by the Phillips family of Michael David Winery.  Dave Phillips had been a classmate of Mary’s.  We only stayed briefly because Clark phoned his 2nd son Scott who said that there was news, and he would call him back. When a half hour had passed, Clark suspected the worse, so we headed back to Sacramento.  We arrived just as the whole family was heading to Cafe Bernardo.  We saw Jim and then joined Scott and wife Sue from San Rafael, #3 son Dan and wife Anne from Elk Grove, and Jim’s wife Deb and their children Noah and Elana who had flown home for the weekend from Reid and Occidental Colleges, and Jim’s cousin Matt from SF.

The cardiologist had done an endoscopic exam of the heart lining and determined that there was some vegetation harboring bacteria and had found the anti-biotic to which it was sensitive. It will take about 6 weeks on this anti-biotic, but there wasn’t enough vegetaion to justify replacement of the mitral valve.  There is danger of another stroke if more vegetation breaks off, and there is of course a long road of speech rehab ahead.

When we got home, Clark went to the bridge club where there was a memorial for a 90 year old woman with whom he used to play bridge.

Tonight #4 son Craig flew in from Las Vegas, and Clark is out meeting him, seeing Jim, and having dinner with Craig.  He said he would probably pick at food for the 5th time today. He just arrived home and said that Jim’s temperature is back up.

John and Erin brought back a DVD player and some movies from her house in Davis, and John got the DVD player working and they have Pride and Prejudice going in the background in her room as they chat with Clark.

Pic of Erin and the boys today

This morning was super busy with calls from 4 different hospice people, the bath aid, the chaplain, the supervisor of nurses, and the head clerk regarding Erin’s Medicare coverage.  Clark went down to Sutter Hospital to see his oldest son Jim who had been hospitalized for diverticulitis and fever.

I made some lentil soup for lunch, and then in midafternoon Clark and I went to an 80th birthday party for my friend Sue who had gone to Oaxaca with my sister Patricia and me 9 years ago and whom I have know since I first came to Sacramento 54+ years ago.  Sue’s sister and 3 nieces put on a lovely party. Cousin John and Erin went to Trader Joe’s while we were gone.

We had just arrived home, and I was fixing dinner, when Clark got a call that his son, Jim, age 56, had had a stroke while in the hospital.  It struck the speech center of the brain … the same place as Erin’s tumor. Jim is not paralyzed, but cannot talk. He had been complaining of heart problems and he and his wife Debbie had not really believed that his problems were associated with the colon. The neurologist said that he has endocarditis and a piece of dead tissue from the heart broke off and caused the stroke.  He is having more tests tomorrow.

Thank goodness that John was here to stay with Erin so that I could drive Clark to see Jim in the hospital.

When Clark and I arrived home from bridge about 10:30 pm, we heard lots of laughter and voices.  We had left Erin  home with her cousin John who arrived from Albuquerque this morning.  I couldn’t figure out why there was so much conversation going on. But, Colleen had driven home from work in Carpenteria bringing Deke with her.

Clark and I joined the group and Colleen took this photo of left to right: 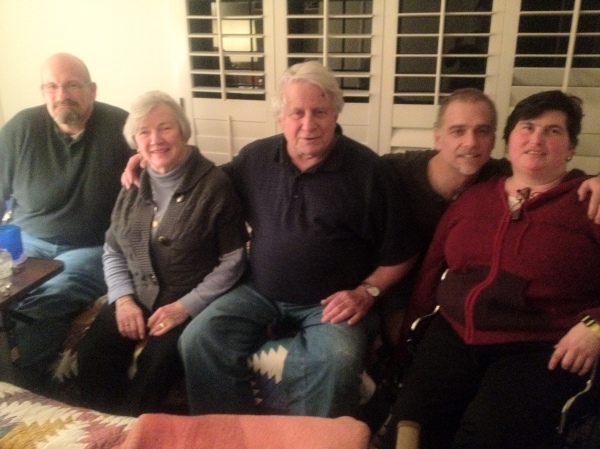 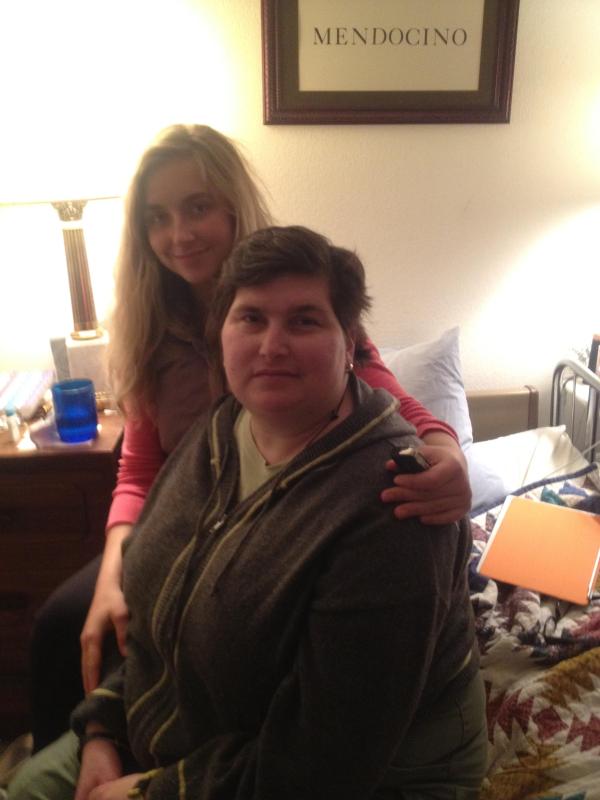