Comcast paid us another visit today …. this time to extend the TV cable to Erin’s room. They had been out a couple of weeks ago, but wouldn’t do the installation without Homeowner’s Association written approval which I got this week.  Now Erin will be able to watch TV in her room on her new little TV.

Erin was feeling sore today in a good way after her visit from Lucy yesterday who gave her a Bowen’s treatment, sort of a message.

Clark cooked cioppino this afternoon while Patricia and I were at bridge, and Erin really liked it. It was accompanied by French bread which Erin and Patricia spread with room temperature butter, whereas Clark and I put cold fresh butter chunks on ours.

Erin is wearing her new turquoise, fushia, and lime green hat which cousin Tom made and hand delivered by Patricia.  Erin is cold most of the time.

Tonight Brandon, Lisa, and Beck came by and Beck played his guitar for us and ran around non-stop …. ah, the energy of a 2-year-old.

Unbeknownst to me, Erin not only took the photo below of Clark and me at dinner tonight, but posted it. She was particularly proud of incuding the iPhone in the picture. It was a Christmas gift from Clark who had been frustrated by the garbled sound of my old phone. My kids seem to be impressed with my up-to-date gadget.

My sister Patricia arrived from Denver late this afternoon and she was supposed to call Clark who was waiting in the cell phone parking lot at the airport.  But, when she got off the plane, her phone locked up.  There were no pay phones in this day of cell phones, so she asked the information clerk if she could borrow his phone. When she said, “Clark,….”, he said that was his name!

When they got here, Erin took a look at the phone, took the battery out, and reinstalled it, and then the phone started up normally.  Patricia said that she wouldn’t have even known how to remove the battery.

Colleen, Deke, and Wheeler came over for dinner. Colleen brought ham-lentil soup which she had made from the ham bone from lunch last week.  Ahead of time both Clark and Erin told me that they didn’t like lentil soup. Clark had 4 helpings and I think Erin had 3!

This afternoon my friend Lucy from duplicate bridge came over and met Erin for the first time. A little later Steve came by.  …  a busy day.

Oh, I almost forgot to mention that we had to get up at 7 am to be ready for the Comcast technician who was coming between 8 and 10 am. He replaced a few connectors and got our speed up to 23 Mbps .. almost 10 times faster than it was. 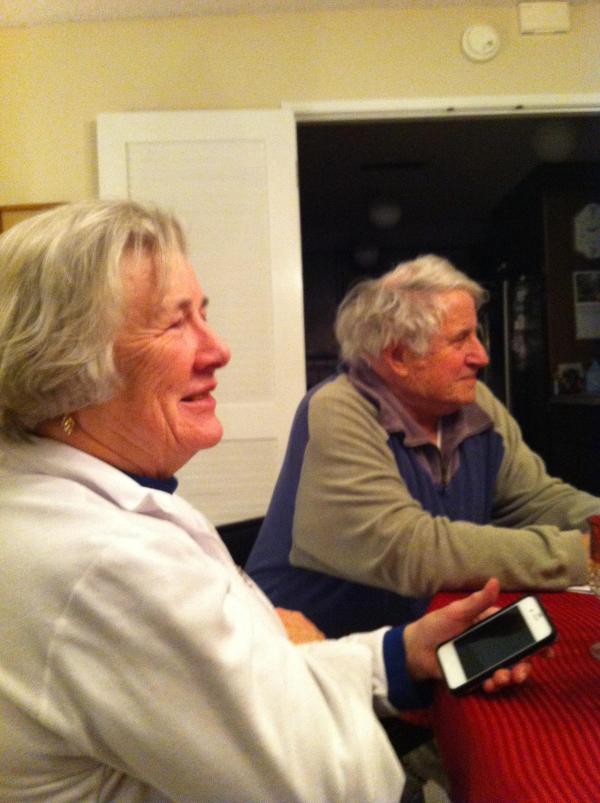 Highlights for Erin today were a phone call from Geraldine from England and a visit from mother-in-law Judy who drove over from Davis this afternoon.

Tonight while we were at bridge, Erin said that she did all her laundry, and though she couldn’t fold it with use of only one hand, she was able to put in away in the drawers.

We called Comcast today because our internet has been extremely slow for the past week.  Sometimes we can’t send our email or post to the blog when we want to. The person I talked to today had me go to speedtest.net and wait forever for the center part of the screen to tell me my speed. It was 2.51 Mb/sec and it is supposed to be 12 Mb/sec, so a technician is coming tomorrow morning.  Hope he solves our problem!

Wed. the cleaning ladies come, so we get out of the house. I went to bridge, and Clark and Erin went to Denny’s where they parked in a handicapped spot and Erin walked in with the aid of her cane. She had her favorite vegetarian omelet with extra spinach.

Then at Target, the handicapped spot is some distance from the entrance, so someone had left an electric scooter nearby, so Erin used that to get to the store entrance, but it was difficult for her to use the scooter with only one functional hand.  Inside the store, she abandoned the scooter and sat in the restaurant while Clark picked up a couple of items, then she joined him in the checkout line pushing the cart. She held onto Clark’s arm to get back to the car.

When they got home, she took a nap and Misel (Michelle) came up from Davis and stayed for about an hour. Erin finds her very soothing to talk to.

Erin’s cousin Dave from Portland visited today with his 18-year- twin daughters.  They were on their way back to Portland after spending Christmas in the Bay Area visiting my sister, Joan, and husband Ralph and Dave’s 4 sibliings and their families.  Dave is the oldest of the 20 cousins.

Erin enjoyed their visit and talked animatedly for the hour or so that they were here.  They left about 2pm with a 12 hour drive ahead of them…. Dave doing all the driving.  The girls said they put their priorities on applying to college and not on getting driver’s licenses.

Tonight Clark got called into bridge, so Erin and I had a nice evening of chatting while I put away Christmas decorations.

Erin spent the morning recuperating from a busy Christmas weekend.  But, by afternoon she wanted to go out to shop and had a shopping list written with difficulty with her left hand.

When she and Clark got to the grocery store at Lohmann’s plaza, she didn’t have the energy to get out of the car. I happened to call them just as they were trying to decide what they were going to do.  I told them I was going to the phone store and to a fabric store to buy some buttons.  So, they decided to try to chase me down.  The phone store was so busy, that I tried to chase them down in Lohmann’s Plaza. At that point they were near the button store!

So, Clark suggested that they just drive around.  While they were driving,  Erin noticed the Pasty Shack on J St next to the post office. Since the post office was closed for the Monday holiday, they could park there and she did walk the short distance to the shack with her 4-pronged cane.

Clark, a former south area resident, had never been to the Pasty Shack before, and Erin wanted to introduce the tasty Cornish pasties to him. They ate small Mexican pasties and they brought home uncooked chicken, vegetarian, and Cornish pasties.  They are going to go back on a Friday when they have chili verde pasties. Erin said that she used to go there when she when she was just out of college.

She also used to go to the Club-2-Me bar next door, and told Clark that she got drunk there.  She seemed to associate happy times hanging out there with big brother Brandon and his friends.

Steve and his Dad came by tonight to get Steve’s jacket which he left here yesterday. It had his wallet with Driver’s License in it.

Erin went to bed about 10 pm tonight – early in a Wheeler household.